This is the Commercial Club/Timrod Hotel at 101 Meeting Street. The Commercial Club stood on Meeting Street between the Charleston County Courthouse and Hibernian Hall. The building was a late-19th century row of four attached tenements, remodeled c. 1904 as a residential/businessmen’s clubhouse. In 1918 the clubhouse was converted into the Timrod Inn (later known as Hotel Timrod). The porches were added some time before 1940. The hotel closed at the end of 1955, and in 1964 it was demolished to clear a site for the Charleston County Office Building. (Source: Preservation Society, Halsey Map Project.) 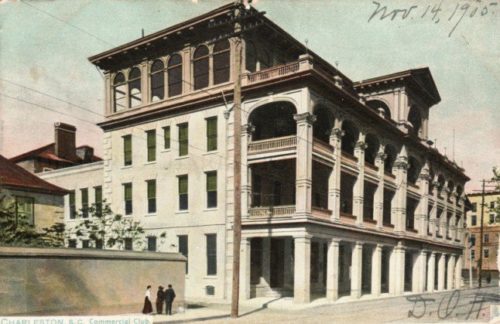