Featured is the Thomson Auditorium, later the home of The Charleston Museum, which was located at 121 Rutledge Avenue. After the Bennett Mill Pond was filled, Mayor William Ashmead Courtenay was wise to retain Frederick Law Olmsted to design a park for this site. But in May 1899 before the park was completed, the City decided to build an auditorium here to serve as convention space, particularly for the United Confederate Veterans. A bequest from John Thomson to the City was used to finance the auditorium construction. Although designed by the architect Frank Milburn, who was selected early in his career for this commission, the structure was built in a temporary manner with a cast-iron frame and exterior stucco with applied ornament in the Beaux Arts style. By 1907 the auditorium became the home of The Charleston Museum, which remained here until the collection was moved into a new building on Meeting Street in 1980. Within a month, the old building burned. The original semicircular colonnade has been preserved as an architectural folly. The city partially restored the plan of the original Cannon Park, and much of the site remains as open green space. (Source: The Buildings of Charleston by Jonathan Poston.) The featured color photographic postcard was published by Colourpicture Publishers, ca. 1960s. 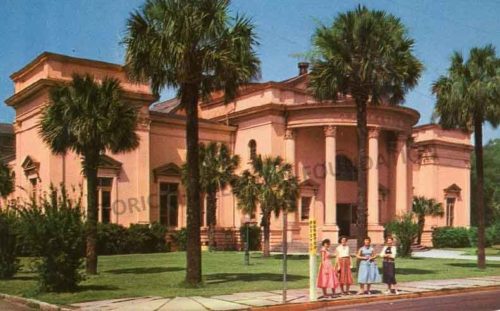