Isle of Palms Bath House and Pavilion: Prior to the summer of 1898, the landscape of the Isle of Palms consisted of sand, palmetto thickets, wild dunes, “a semitropical jungle where snakes, alligators, wild boar, deer, and bobcats were regular inhabitants,” until Dr. Joseph S. Lawrence saw the possibility of the island becoming a major resort. He established a ferry that crossed the Charleston harbor to Mount Pleasant and also formed the Charleston and Seashore Railroad Company,which was an electric trolly that took its passengers from Mount Pleasant to “the previously unknown country” of the Isle of Palms. The new resort attracted throngs of people and became a beach destination for day trips. Soon after, a a huge dance pavilion had been constructed as was a bathing pavilion with two bath houses, each containing 75 rooms and surrounded by a 20-foot wide piazza. The pavilion survived the Hurricane of 1911, but sadly, it was destroyed in a fire on January 29, 1938. (Time and Tides on the Long Island: Isle of Palms History, Flora & Fauna [Miles, 1994]; News & Courier, 1/30/1938). See additional photographs at https://tinyurl.com/2nhtpfne. 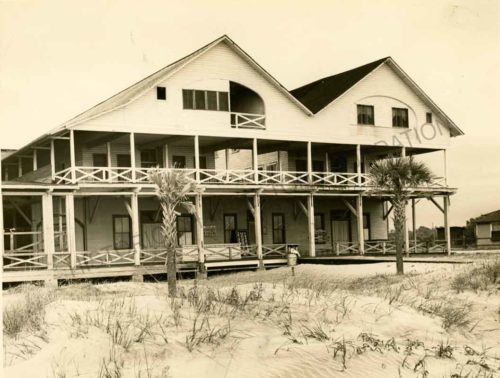