238-242 King Street (Hotel Calhoun) was located on the east side of King Street near Market Street. Constructed shortly after the 1838 fire, 238-242 King was the largest group of buildings on the site of the development of Charleston Center [later known as Charleston Place]. The substantial building with Greek Revival lines anchored the bend of King Street. Advertisements boasted “rooms rented at $2 per day, with moderate rates for rooms en suite for families.” The hotel was renovated ca. 1882 (which likely dates the photograph to that time), after which rooms were $2.50 per day and the hotel advertised a “billiard parlor, wine room and cigar emporium.” The hotel closed in 1903 and three years later, W.S. Lanneau bought the property and sold it the same year to the Washington Light Infantry Armory Co. By the 1940s, a JC Penney store occupied the building. Simons & Lapham altered the building in 1954, removing the decorative tin window hoods and cornice, stuccoing the façade, and adding a glass and aluminum recessed storefront. The building, and its neighbors were demolished for the construction of the Charleston Place complex. (“Former Penney Building Dates to Early 1840s,” News & Courier, 2/6/1978; The Old Codgers’ Address Book, 1900-1999; “238-242 King Street (Commercial Building),” Library of Congress catalog record.) Click here to see the original featured photo; click here to see a photo of the altered building. 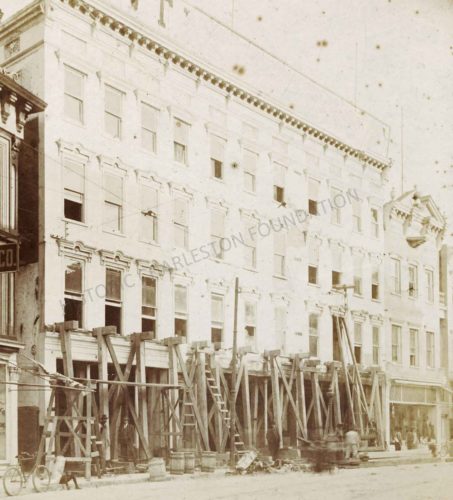