145 Rutledge Avenue, formerly known as 11 Rutledge:  There’s no history of this property in HCF’s Archives. What is known is that by 1880, Frederick Heinz, a baker, was living at 11 Rutledge Avenue, located at the northwest corner of Rutledge Avenue and Mill Street. By 1902, the address became 145 Rutledge. Sanborn Maps don’t indicate the presence of the small building next to the three-story house but that appears to be the location of the ice cream shop, while the family resided next door. An 1886 advertisement announced “Don’t forget to pay Heinz’s Ice Cream Park a visit. Everything of the best is served, and, midst the beautiful flowers and sparkling fountains, you can spend a pleasant hour.” In 1906, 145 Rutledge was offered for sale as “an unusual opportunity to secure a most desirable home in one of the best localities,” touting it as “substantially constructed—spacious halls, fine, large, airy rooms with high ceilings, large piazzas…outbuildings for servants quarters; stable and carriage house.” Around 1910, “apartment for rent” advertisements begin to appear in the newspapers and it appears that rental apartments remained available until the early 1960s. By 1963, the property was demolished as this advertisement indicates: “WRECKING 145 Rutledge corner of Mill Street. Plenty of good used material and 3 marble mantelpieces.” Today, MUSC’s Rutledge Tower stands on the site. (“America’s News—Historical and Current,” “Heritage Quest—Family History Books and Directories,” and  “Fire Insurance Maps Online [Sanborn Maps], each accessed via the Charleston County Public Library website.) 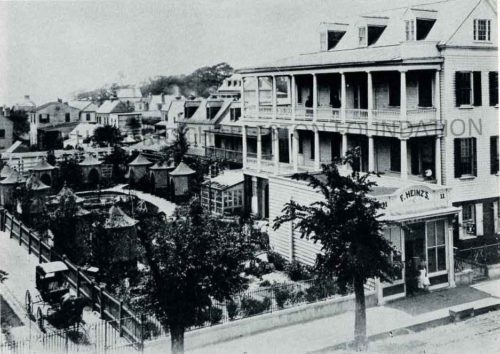