Constructed in 1815, St. Andrew’s Hall (120 Broad Street), was located just east of the Cathedral of St. John the Baptist. It was used not only for St. Andrew’s Society functions but rented to other organizations for social, cultural and political gatherings. Both President James Monroe and General Marquis de Lafayette stayed here during their visits to the city. It also was used by the St. Cecelia Society for concerts and balls. The hall’s most historic moment was during the Secession Convention of 1860 during which the Ordinance of Secession was adopted. The following year, on Dec. 11, 1861, St. Andrew’s Hall was destroyed by a great fire that consumed much of the city. Only the iron fence and flagstone pavement in front of the hall remain. (City of Charleston Tour Guide Training Manual.)  The photograph showing the building in ruins was taken in 1865 by the United States War Department. 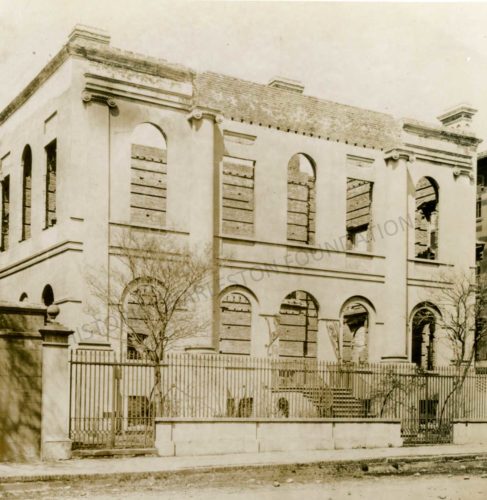