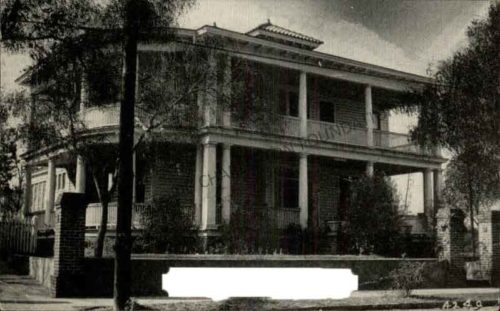 There’s no history of this house in HCF’s Archives. What is known is that it was constructed ca. 1914 when the address was 385 Rutledge Avenue. Newspapers and Sanborn Maps indicate is that it was located at the southwest corner of Rutledge Avenue and Moultrie Street and was used as a boarding house, later called the Parkview Court Apartments. In the 1920s and 30s (and maybe longer), Mrs. C. Henry Ammes lived there. She was the wife of C. Henry Ammes, a musician and leader of the C. Henry Ammes Orchestra, which provided the musical accompaniment to theaters. He also led the orchestra at an annual dance festival at the Charleston Rifle Club in 1923. Mrs. Ammes was also musically talented, serving as the director of the Senior Choir at St. Andrew’s Lutheran Church. The site where the house stood is now the location of South State Bank with the address 637 Rutledge Avenue. (Building Permit Database; “America’s News—Historical and Current” and “Fire Insurance Maps Online [Sanborn Maps] accessed via the Charleston County Public Library website.)