The answer is the Idle Hour Restaurant (1067 King Street). Before the John Dart Library was built in 1968, 1067 King Street was the location for this popular restaurant that in 1939. It quickly became one of Charleston’s better-known restaurants. An article in the News & Courier gushingly reported that the provision of good food meant “an important means of promoting speed and efficiency in work. Give a workman a good place to eat and his work will be faster, more accurate and efficient and his outlook on life will be more cheerful.” From 1946 until the mid-1970s, subsequent owners operated the restaurant as a “white-tablecloth” restaurant, a private club called El Casanova, the Beach-Comber’s Barbecue and Drive-In Club, the Merchandise Mart furniture store, a Chinese restaurant called the Fan-Tan Club, the RVA Club, the Moose Lodge, and Charley’s Supper Club. The location was then bought for use as the John Dart Library, which opened in 1968. (Kevin Eberle, 2021.) 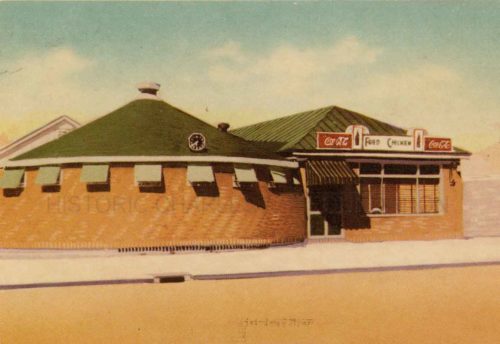 One response to “The Lost Architecture: September 2021 Edition”