February’s “Name That Building” featured the Colonial Motor Court that had been located at 142 Cannon Street. There’s no history on this building in HCF’s Archives. What is known is that it was located on north side of Cannon Street, east of President Street. A former residence, sometime between 1951-1955 it was converted to a motor court (lodging) and served as such until the ca. 1969 when the City Housing Authority purchased the site and neighboring lots to an apartment building for the elderly. The request to demolish 142 Cannon Street and the neighboring single-family houses was approved in 1970 and in September, the buildings were demolished. The site now serves as a parking lot. (News & Courier and Evening Post advertisements and public notices accessed via the database “America’s News—Historical and Current”–Charleston County Public Library website; Sanborn Maps accessed via the database “Fire Insurance Maps Online”—Charleston County Public Library website.) 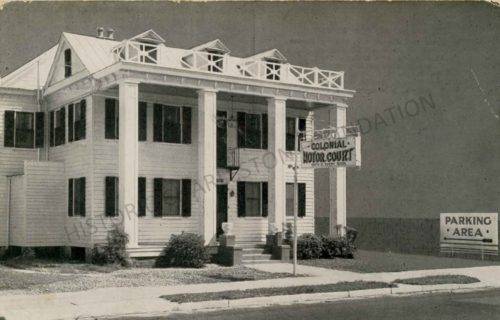