The Lost Architecture: May 2021 Edition

340 Meeting Street. This house was built by Joseph T. Weyman ca. 1822 on part of a tract originally granted to Richard Cole, a carpenter on the ship Carolina that brought the initial settlers to the Charleston area in 1670. Weyman bought the land in 1819 from the Wragg family, who had held it since 1715 when Samuel Wragg acquired a part of the original tract. Tradition holds that the architect William Jay may have designed the house, given its similarities to 26 Meeting Street. Weyman underestimated the cost of the building and lived in the house only a short time, naming it “Weyman’s Folly.” It then passed through a series of owners until 1919 when it was purchased by the Salvation Army, who operated it the Argonne Hotel during WW I and other hotels before selling it in 1938. After other private owners briefly held the property, it was condemned and sold to the U.S. government in 1941, which intended to construct a new post office on the site. However, these plans were delayed by the outbreak of World War II. In 1948, the federal government announced plans to demolish Weyman’s Folly and the rest of the buildings on the block and by 1955 the site was cleared. By 1960, plans changed from building a post office to building a new office building for federal office space. Construction of the L. Mendel Rivers Federal Building was completed in 1965. (Payne, David: Charleston Contradictions: A Case Study of Historic Preservation Theories and Policies [dissertation, 2013]; News & Courier “Do You Know Your Charleston,” 11/8/1948.) 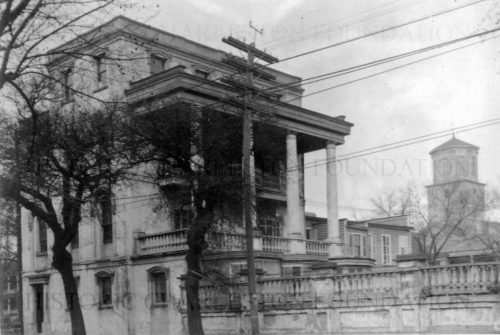