Featured is the John Street Fire Station (44-48 John Street), also known as Hook and Ladder No. 1. There’s no history on this building in HCF’s Archives. What is known is that it was located on the north side of John near the corner of King and John streets.  Based on early Sanborn Maps, the building featured in the photograph was constructed sometime between 1888 and 1902. (In the 1884 and 1888 maps, what appears to be a different 2 or 2½ story fire engine house stood on the site. The 1902 Sanborn Map features the building documented in the photograph.) The fire station housed the first all-Black company and was the last fire station to use horses and be “motorized.” In the 1940s the City budget included funds to replace the John Street Fire Station with a new building and a new station was built on Coming Street near Calhoun Street. Between the 1940s-1950s, the John Street building was used as a building materials warehouse and then as a liquor store. And sometime between the publication of the 1951 and 1955 Sanborn Map, the building was demolished and the site became a parking lot. (News & Courier and Evening Post articles accessed via the database “America’s News—Historical and Current”–Charleston County Public Library website; Sanborn Maps accessed via the database “Fire Insurance Maps Online”—Charleston County Public Library website.) 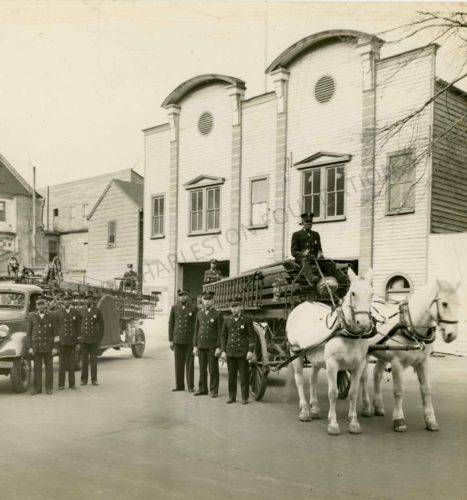