Fort Sumter Filling Station, also known as Boxx’s Filling Station (71 King Street): Constructed 1930, this late-Craftsman style gasoline station until was one of only a few businesses remaining in the “South of Broad” neighborhood. Its stucco had a spatterdash finish characteristic of the few peninsular Charleston buildings built in variants of the Craftsman style after World War I. In 1999, it Historic Charleston Foundation identified the building as “endangered.” Sure enough, Historic Charleston Foundation took documentary photographs of the building in May, 2000, and by January 2001, the BAR gave conceptual approval for the construction of two houses on the lot. (Sources: The Buildings of Charleston [Poston, 1997]; “Endangered Structures Report,” HCF, 1999; News & Courier, 1/18/2001). To see the documentary photos of the gas station, click here. 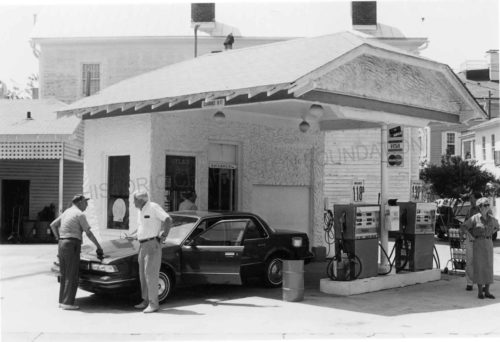