Pictured is the Orvin Inn, also known as the Orvin Motor Court and the John C. Calhoun Motor Court, which was located at 194 Calhoun Street. A postcard boasts “106 Rooms – AC and TV – 24 Hour Switchboard Service – Heated Swimming Pool – Restaurant, Banquet and Convention Facilities.” The building was later named The College Inn when the College of Charleston purchased the motel and used it to house students until the 1990s. At some point thereafter, the building was demolished and used as a parking lot, and in the mid-2000s, construction began on a new science building and the Mace Brown Museum of Natural History, which occupy the site today. (Post & Courier articles accessed via the database “America’s News—Historical and Current.”) 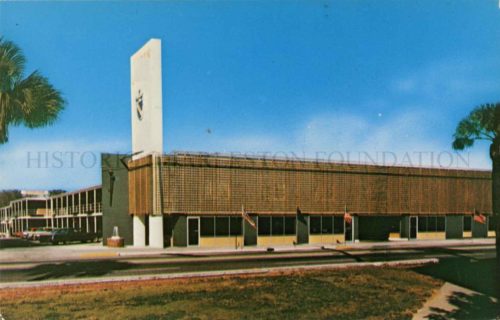