In the 18th century, spinsters – unmarried women over the “appropriate age to be married” (about 25) – were  generally marginalized by society and marriage prospects were almost nil. It could be heart-breaking for a parent. To improve marriage prospects for Mary, his daughter, Josiah Smith, a wealthy merchant, built her this multi-bedroom, brick house in 1799.  At the time of the house’s completion, Mary was likely in her late 20’s or early 30’s, well past marriageable age.  Smith was likely embarrassed by local papers that referred to his daughter as a “spinster” and built the house to attract male suitors. Despite his efforts, Mary never married.

Upon her death in 1832, Mary left the house to her nieces and nephews who deeded it to her sister, Ann Smith Tennent.  The house remained in the family’s possession until it was sold in 1869.  After passing from the Smith family’s care, the house suffered from neglect and disrepair.

The Foundation acquired the house in 1966 to save it from demolition as part of the Gaillard Auditorium construction project. It was moved to its current location, 100 feet away, at the lightening speed of 2 feet an hour.  Several notable changes were done to the house including the replacement of the piazza which was originally part of the Blake House at 321 East Bay Street and rebuilding the rear addition that didn’t survive the move. Fortunately, the Federal interior had remained largely intact and required only partial restoration. In 1973, H. A. DeCosta Company completed the restoration and protective covenants were placed on the deed by Historic Charleston Foundation to ensure the long term preservation of the house. 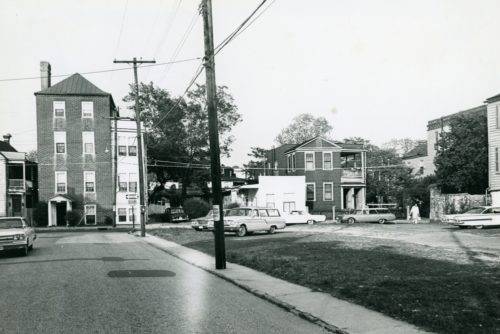 The original location of Mary Smith’s house at the end of George Street. George Street was extended as part of the Gaillard Auditorium project. 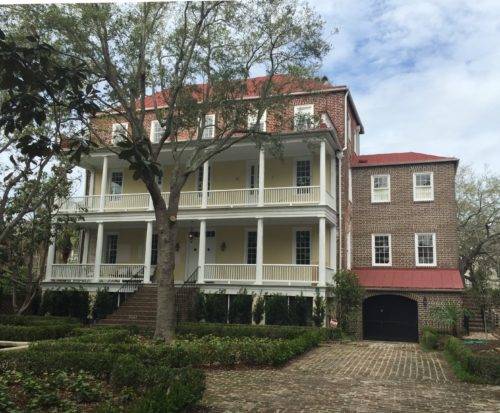