The People Behind The Preservation

The Samuel Gaillard Stoney Conservation Craftsmanship Award was created in 1995 to recognize craftspeople who have kept alive the tradition of excellence in the building and artistic trades for which Charleston has been renowned for centuries. In 2020, we are pleased to honor Robert Johnson with this award. 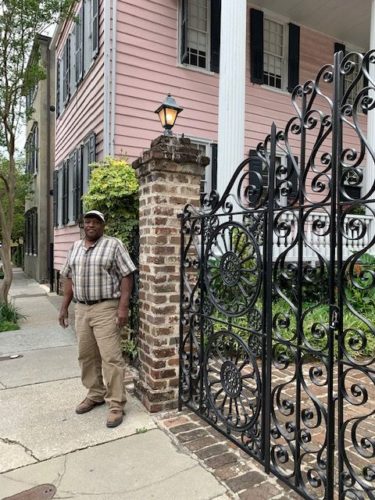 Lowcountry master craftsmen, contractors and architects in the preservation field hold Robert Johnson, stone mason, in the highest regard.  While attending South Carolina State University, Johnson began his career in the masonry trade as an apprentice working under Hayward Manigault. Manigault taught him the majority of what he knows about masonry. In 1976, Manigault and Johnson were hired to complete a job in Asheville, North Carolina.  During the course of this job, Johnson decided he was ready to start his own company. He did so the following year in his hometown of Moncks Corner. Johnson’s first job back in the Lowcountry was on a Society Street garden hardscape. Contractors and architects quickly noticed Johnson’s skill, meticulousness and passion for quality work.

He has since worked on countless projects in and around Charleston’s Historic District, from repointing exterior brick walls to installing garden hardscapes designed by local landscape architects Sheila Wertimer, Robert Chestnut and Glen Gardner, among others.

Johnson’s passion for his craft has led to his position as one of the areas most sought after masons.  He especially enjoys working for those clients who show an appreciation for quality work and craftsmanship, and he welcomes opportunities to endeavor alongside other craftsmen who are equally passionate about their trade. He says one of the most gratifying parts of being a Master Mason is seeing the high quality final product.

When asked what Johnson would recommend to individuals interested in becoming master craftsmen, he says: “You must have patience with the work. You can’t rush quality. It’s imperative to get the details right.”