Few would argue that the Charleston peninsula needs a comprehensive strategy for combating sea level rise and persistent flooding. The Army Corps’ recommendation is a perimeter sea wall stretching from Magnolia Cemetery all the way around to the Wagener Terrace neighborhood. HCF supports that approach with the caveat that the wall not only protects the city, but also integrates with its historic fabric and the city’s ongoing flood mitigation projects.

This is why HCF has been so heavily involved and led the private sector effort to engage the Waggonner & Ball team (who led the Dutch Dialogues Charleston initiative) to conduct an independent analysis of the Army Corps study and to assist the city in developing the best strategy for navigating this complicated process. The Waggonner & Ball team are experts not only in Charleston’s flooding problems, yet also in working with large-scale Corps projects.

Their full report will be released during a City Council workshop in February, yet HCF’s key takeaways from the initial findings include:

In their analysis of the proposed sea wall, the Waggonner & Ball team worked alongside City staff and the Army Corps project team to review the project outcomes to date and make a technical analysis. Importantly (and something that HCF recommended in our comments to the Corps last spring), the team divided the peninsula into logical sections and tailored their analysis and design criteria for each phase.

The Scope of the W&B Analysis:

According to the National Weather Service Coastal Flood Event Database, 2019 and 2020 produced the highest number of tidal flooding events on record for the Charleston Harbor. Collectively, increased tidal flooding events like we’ve experienced these past two years, increasing storm frequency and intensity, and the reality of sea level rise mean that Charleston must weigh every measure to preserve our city, especially if we can secure significant federal funding. HCF continues to view this Army Corps project as a massive opportunity to protect the peninsula for the long term. 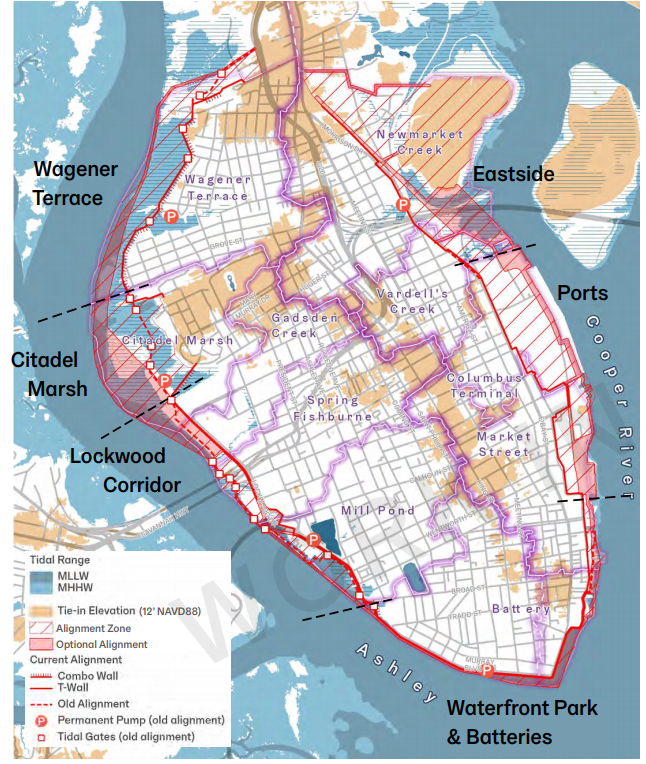 One response to “Perimeter Protections: Preliminary Findings by the Dutch Dialogues Team”