The Aiken-Rhett House is unique. The main house – a grand Charleston residence – would be significant enough to warrant attention, yet what elevates the property from merely interesting to exceptional is the survival of its dependencies. In a city where the dependencies – spaces largely occupied by enslaved domestic servants – have been converted, demolished or otherwise hopelessly compromised, the dependencies at the Aiken-Rhett House have survived largely unchanged from the antebellum period. However, this survival is not relegated to the surviving structures above ground. The ground beneath the former laundry room floor was excavated in 2015 as part of a larger interpretive project. This relatively small area yielded a staggering 10,000+ artifacts and provided dozens of new stories for our staff to research and interpret. The artifacts uncovered ranged from pencils to porcelain to hundreds of buttons, all objects which would have been handled and used by African Americans in the back lot of the Aiken-Rhett House both before and after the Civil War.

The focus of the Aiken-Rhett House is to tell the story of all of those who lived on the property. A handful of these stories have been included in the new archaeological exhibit recently installed in the laundry space. Designed by Charleston architect Simons Young, a cantilevered walkway floats over the site, allowing visitors to peer down at the features uncovered during the dig. Five artifact cases illuminate artifacts specific to the women who labored here in the 19th century, and directional light illuminates the architectural features associated with the laundry room itself, including the location of the kettles and fireplaces. Even in a city as immaculately documented as Charleston there are still many questions about daily life, especially for the enslaved population. Archaeology shines new light on the lives and labors of the African Americans upon whose tireless work the Aiken-Rhett lifestyle depended. 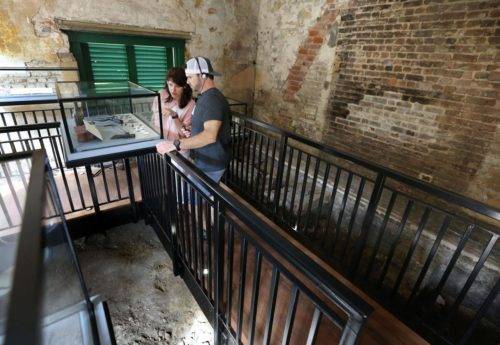 The new exhibit “floats” above the site of the archaeological dig.
Photo: The Post and Courier