Protecting the Cultural Character of our Neighborhoods

Like many of you, we have become exhausted by the never-ending stream of larger and larger development projects occurring not just on the peninsula, but all around the Charleston region. Every two weeks a cloud of dread shadows our review of the newest Board of Architectural Review agenda. Usually there is at least one large new hotel or multi-family housing development to pore over. To make matters worse, the architecture seems to get more generic with each subsequent application.

These hotel and apartment blocks occupy massive lots of the city. Some recent proposals cover almost 2 acres of ground within a single foundation and are up to 8 and 9 stories tall. The goal of developments like this is simple, low construction cost to maximize square footage, density, and provide easy access to personal automobiles. Many of these developments are funded through out-of-state equity funds or REITs (Real Estate Investment Trusts) which seek a fast 1-3 year turnaround on these speculative ventures. They invest heavily in hot real estate markets with existing housing deficits (i.e., Charleston), and use proforma-driven building designs to minimize construction costs, while maximizing occupant density and profit. They do this under the guise of concern over housing deficits and affordability, but in reality the city is left with upscale, expensive rental apartments that are sometimes riddled with construction defects.

Almost every one of these new buildings is branded as “luxury” apartments, with rent as high as $1,700 a month for a 600 square foot unit. Developers are selling a repackaged version of the American Dream: a luxury, one-bedroom apartment with rent higher than the mortgage of an average West Ashley home. This all comes at a time where Charleston faces a deficit of affordable real estate. According to the City Plan, Charleston needs to create 16,351 affordable units by 2030 just to meet current demand. 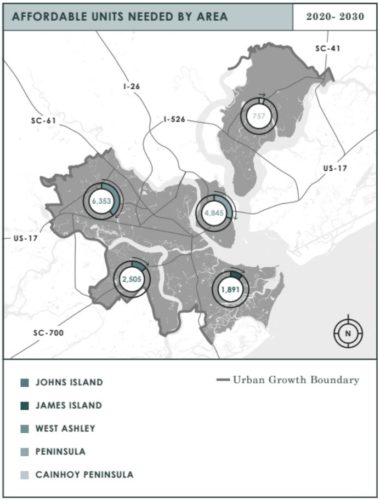 So, how do all these residential developments impact the affordability of housing in our city? To put it frankly, they don’t. The recently approved Charleston City Plan rightly targets the need for what’s referred to as the “missing middle” of urban housing. Charleston has ample stock of traditional single-family houses—whether downtown or in the suburbs—and now we’re plagued by these new mid-rise luxury apartments clogging the skyline. We have leap-frogged from lower density neighborhoods to these dense, uninspired apartment complexes without considering functional housing types in the middle of the density scale that could address our need for more housing while also better fitting into our existing urban fabric. “Missing middle” housing is represented by townhouses, multiplexes, duplexes, and cottage courts. These are all development typologies that can reach higher density and affordability goals, while also creating walkable, human-scaled neighborhoods.

Single-family houses make great neighborhood communities, but they don’t meet the density and affordability requirements of a growing, contemporary city. The addition of missing middle housing could help to solve the exploding need for housing in Charleston, and not just on the peninsula. The smaller scale of these developments also lends itself to architectural design that is more familiar in Charleston’s historic landscape and helps to retain our strong sense of place. Local architects Bevan & Liberatos have done extensive analysis on meeting urban density goals while utilizing this Charleston style urban plan. More can be found on their website.

Now that the Charleston City Plan has been approved, our City Council members, community leaders, and advocacy groups need to work together to overhaul our zoning ordinance to better reflect the goals of the City Plan. The overdue zoning overhaul should seek to dissuade or even outright ban massive “Texas donut”-scale developments in our city. We need to push for more appropriately scaled and affordable urban housing alternatives, and to create a zoning ordinance that incentivizes these types of developments and home ownership. They will help to create more vibrant, affordable, and sustainable communities.