The Lost Architecture: May Edition

Can you Name This Building?

The answer is 61 Washington Street. This apartment house was located on the west side of Washington Street between Calhoun and Charlotte Streets. There’s no house history in HCF’s archives but an interesting tidbit is that its second and third stories can be seen in the upper left corner of Edward Hopper’s painting “Charleston Slum.” The photographer, Frances Benjamin Johnston, likely photographed the house when she undertook the photographic documentation of southern architecture as part of a systematic survey supported by the Carnegie Corporation. Both the painting and the photograph were featured in the Gibbes Museum of Art’s 2017 exhibit “Perspectives on Place.” This photograph by Frances Benjamin Johnston, ca. 1937, and four others can be seen on the Library of Congress Prints & Photographs Online Catalog. Photograph courtesy of the Library of Congress. 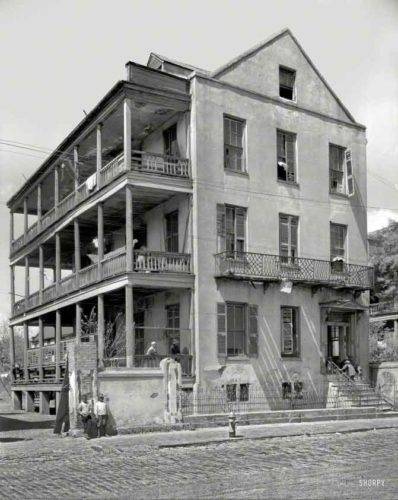