From the Collection: By Way of Paris with Promise of Funds 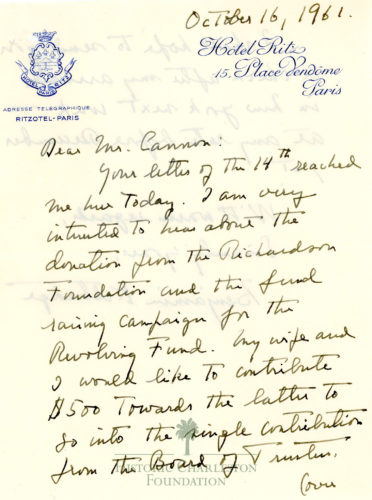 This small notepaper from the Hotel Ritz in Paris is one of the tiny treasures in the Margaretta Childs Archives. The massive campaign for the Edmunds Revolving Fund in the early 1960s involved hundreds of letters being sent between Foundation staff and potential donors. Many of these, along with their responses, have been kept safe as part of the Foundation’s history. The Richardson Foundation had promised $10,000 a year over the next three years if that amount could be matched by local donors. Armed with lists of local businesses, friends, and friends of friends, Foundation staff sent out appeal letters and were met with generosity. Mr. Kittredge and his wife offered to send a check for $500 once they returned home to New York City. While $500 is generous by any standard, in today’s funds that would be approximately $991. The Kittredges were no strangers to the preservation efforts of Historic Charleston Foundation, of course. They owned several homes, including the Col. William Rhett House at 54 Hasell Street. They would later gift Cypress Gardens to the City of Charleston in 1963.

Learn more about the Common Cause Loan Fund here.