Which Areas in Charleston are Prone to Flooding and Why?

In his 1875 Guide to Charleston Illustrated, Arthur Mazyck described Charleston as “beautiful as a dream, tinged with romance, consecrated by tradition, glorified by history, rising from the very bosom of the waves…” Almost 150 years later, Charleston still has these wonderful attributes, but the waves now threaten to overtake this beautiful place.

Still, the low-lying nature of Charleston and the flooding of its streets during storms and high tides are really nothing new. Certainly, the first English settlers recognized the perils of building a city on low land. They located Charles Town on the highest 62 acres of ground on an otherwise marsh-riddled peninsula. The town they built fronted the harbor and was nestled between two creeks (now Water Street and the Old City Market). This early walled city (roughly bounded today by East Bay, Water, Cumberland and Meeting streets) includes some of the oldest structures in the city and almost never floods. Another bit of highest land is King Street, the so-called spine of the city, which was an early trading path and the road that brought people and goods into the early city via a drawbridge located at Marion Square.

When the town expanded into lower lying areas, land filling began. Very quickly, 18th-century Charlestonians filled the creeks and marshland to the south and west of the original city. Over time, the wharves along the Cooper River (east) waterfront silted up and effectively filled in the area to the east of East Bay Street. Look closely at the slight grade changes as you pass by through the old creek bed heading past the Market on East Bay Street, or look east from East Bay along South Adger’s or another one of the old wharves (now streets). These subtle topographic variations are often all that remain of old creeks and marshes.

Today, a third or more of the Charleston peninsula is “made land, filled with ballast, trash, and construction debris and often times less savory items like animal carcasses. Native-born architect Robert Mills noted in his 1826 Statistics of South Carolina that the decades-long effort to convert the low spots “to a firm, high and dry state required perseverance, time, labor and expense.” The city continued to invest in expanding its footprint via landfill to include most notably Murray Boulevard in the early 20th century and Lockwood Boulevard in the 1960s and 70s.

Much of this western edge of the peninsula was historically dotted with lumber and rice mills and other industries sitting on spots of land claimed from the Ashley River. Today, this low-lying area is comprised of newer neighborhoods, the hospital district, Brittlebank Park and the new West Edge development. Charlestonians also expanded to the north, pushing the city limits beyond Boundary Street in 1850 (now Calhoun Street). The creeks that crowded in from the edges of the peninsula created a “neck” of high ground. The area known as the “Charleston neck” has moved ever northward as landfilling and development has moved north. 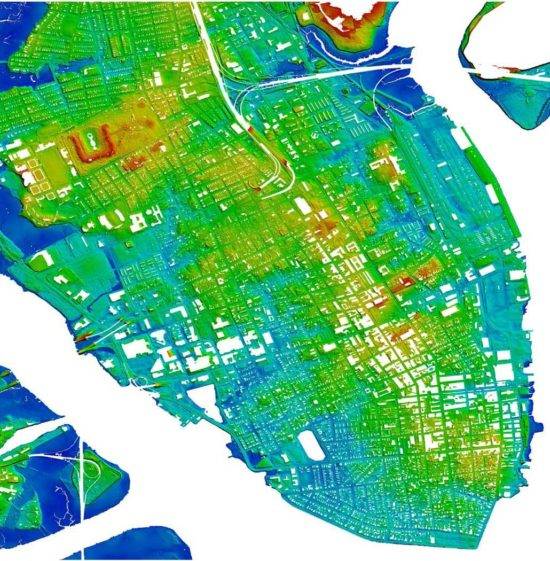 In 1939, Alfred O. Halsey created Historic Charleston on a Map: Showing Original High Tide Water Lines, Fortifications, Boroughs, Great Fires, Historic Information, etc. (pictured above). Known more widely as the Halsey Map, it has delighted and educated historians and the public for years with its wealth of historical information. It is perhaps most applicable today in providing a quick visual reference for distinguishing the original high ground from the areas that were once creeks and marshes and that have now been filled.

Halsey was using old maps, plats and topographic surveys but his mapping holds up well. Today, fly-overs using remote sensing technologies can create very accurate views of the Earth’s surface. Below is a recent map created by our colleague, Dr. John Marcoux, using LiDAR (Light Detection and Ranging) data of the Charleston peninsula. The blue shows the lowest land and green and red show higher ground. Even though the technology has improved, you can still make out those topographic variations that Mr. Halsey so ably illustrated.

2 responses to “Which Areas in Charleston are Prone to Flooding and Why?”