From Historic Structures To Housing Affordability

A Recap of Historic Charleston Foundation’s May 19 Advocacy Forum 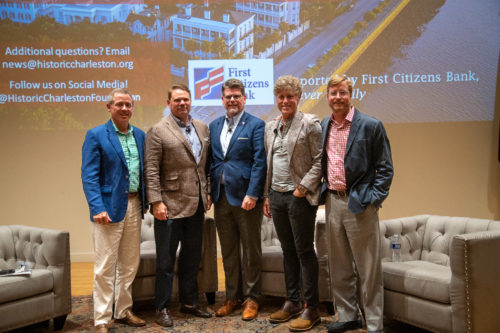 Historic Charleston Foundation hosted an Advocacy Forum on May 19th at the Charleston Museum Auditorium to initiate dialogue focused on the development of the city’s new peninsula plan, which the city has funded and is poised to commence later this year. The goal of the forum was to engage provocative conversation on the most acute challenges to livability and quality of life in Charleston and to become inspired by best practices on complex topics, such as housing affordability, density, transportation, and diversified economic development. 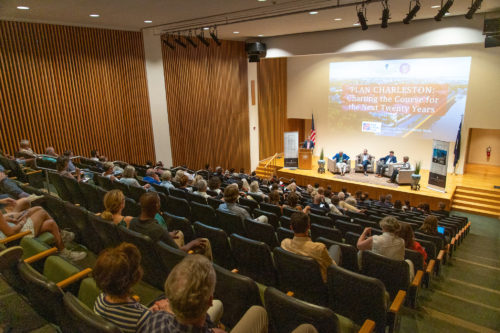 The new peninsula plan will inform planning priorities and decisions for the next 20 years. Our objective is to develop a bold, updated vision for the peninsula that is responsive to the vast array of challenges and opportunities that Charleston is currently facing. The existing plan was created in 1999, and since that time massive demographic, environmental, and economic changes have occurred. Clearly, it’s time for a new vision for the peninsula! The approach needs to be both aspirational and actionable. This public forum was intended to kick-off the conversation and ensure that the community is fully focused and committed to this process. Thus, we were excited to see so many community members, city staff, and interested stakeholders in the audience. 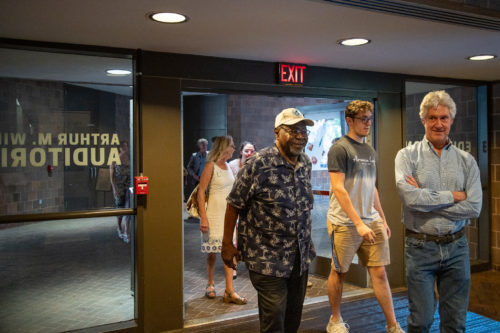 While the population of the peninsula has dropped by about half over that last 100 years, the Charleston region’s population has exploded with an average of 33 new people moving here every day. That said, Charleston needs intentional growth, not growth for growth’s sake. We must be extremely focused on diversity in our workforce recruitment and economic development efforts. In addition to the hospitality industry, much of our recent economic development initiatives have been focused on advanced manufacturing. Because of machine learning and automation, we also need to further develop the creative class and foster content-driven economic development. 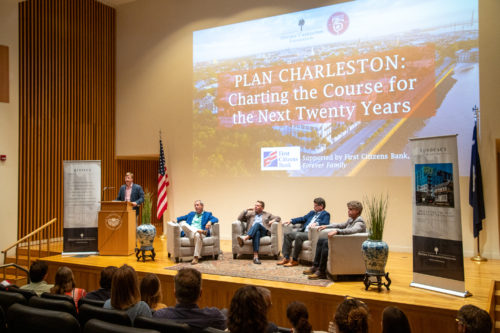 When companies and developers look at locating or building in Charleston, the answer can no longer just be “yes” but has to be “yes and….” We must demand more for our community! As Tim Keane said, why are we always “balancing” in Charleston? Instead, we need to strive for optimal conditions and be much more specific about what type of development we want. The peninsula is small enough to get specific and granular, and this new plan should address future growth strategically while reflecting the desires of the community. As the Post and Courier said in an editorial after the forum: this visioning process affords us a unique opportunity “to think fresh — and to think big — about how the historic peninsula should change in the years to come.” Amen.

Citing the recent Census statistics showing a surprising decrease in peninsula residents, the panel conversation pivoted to density and housing affordability. Density does not have to mean large, ugly apartment buildings that have become the norm for downtown development. One of the panelists even noted that the peninsula was able to accommodate twice as many residents 100 years ago without mid-rise buildings wrapping around parking garages. So how do we accomplish what was possible in 1920 now? Again, we must demand more for our community. Our city must incentivize construction of smaller-scale residential buildings—oftentimes referred to as the “missing middle”—and encourage a diversity of dwelling types in our city. We need to encourage duplexes, triplexes, townhomes, and garden apartments—this is how cities used to grow before the scourge of suburban sprawl and Texas doughnuts.

Not surprisingly, a conversation about density quickly pivoted to traffic and what to do about “all of these cars.” One panelist felt strongly and was bold enough to state that we are never going to solve traffic—ever! He advised that we focus attention and resources where we can actually make a difference. That grim assertion aside, the Charleston region can and should improve transit and incentivize getting people out of their cars, visitors included. Another panelist advised that Charleston must double down on transit in already urbanized areas (the peninsula!) and move people around the peninsula area quickly and easily, rather than focus on moving people from the suburbs to the urban area. Getting people to use transit must feel “safe and fun,” and he felt that Charleston had not yet achieved that.

What was clear from the panel is that Charleston faces myriad challenges, yet with challenge comes opportunity. The new peninsula plan is on the immediate horizon, and the time is now to engage and shape the direction and vision of the peninsula for the next 20 years. The future is what we make it! Once this project begins around late summer, HCF will keep you apprised at every step and advise you of meetings, workshops, and surveys. In the meantime, start thinking about what you want peninsular Charleston to become over the next 20 years.