The answer to the February newsletter’s Name That Lost Building is the Pavilion Hotel which became the St. Charles Hotel and was then later renamed the Argyle Hotel.  The hotel was located at the northwest corner of Meeting and Hasell streets. It accommodated a great number of guests and featured “modern amenities” such as electricity, steam, bathrooms, and an elevator. Legend has it that Edgar Allen Poe visited the hotel on weekends while he wrote The Gold Bug.  The building was demolished in 1957 but the location would continue the tradition of a having a hotel on the site. The King Charles Inn is located at the site now.  (Source: HCF Property File.) Photograph from The Art Work of Charleston, published by W.H. Parish (Chicago), 1893. 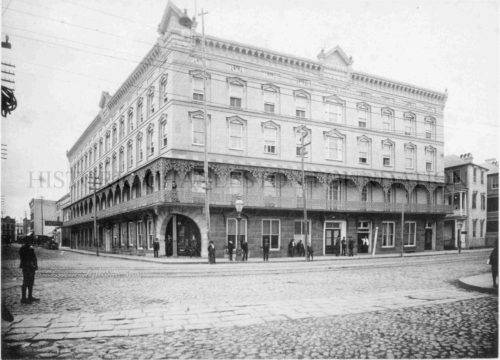 One response to “The Lost Architecture: March Edition”