From the Collection: Campaign Chair 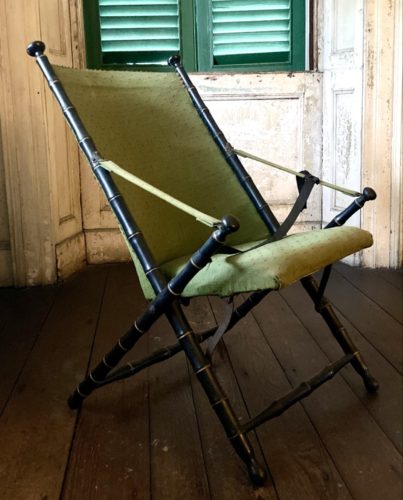 Stroll through one of the second floor bedrooms at the Aiken-Rhett House and you’ll likely spot an old green chair. Dwarfed by the hefty sleigh bed bedside it, its spindly-turned legs and green wool upholstery blends in with the surrounding Victorian furnishings. A closer look, however, reveals that this particular piece was not meant for a bedroom, drawing room, or any other interior space. Actually, one wouldn’t be too far off wondering, “Is that a beach chair?” Close, but not quite.

The Civil War, like practically all wars before it, brought about a flurry of newfangled inventions and gadgets from creators hoping to land lucrative government contracts. Furniture manufacturer P.J. Hardy, who ran a respectable shop on New York’s West Fourth Street, tried to do just that, obtaining the first of several patents for this new and improved “campaign chair” in 1863. Measuring 37-inches tall, just over 25-inches wide, and named for its marketability to constantly moving military outfits, Hardy’s chair utilized an ebonized walnut frame that made the chair lightweight, durable, and reasonably weather-proof. Secondly, the legs and seat were hinged with sturdy iron rods allowing the seat to neatly fold upward into the back. Finally, the adjustable armrests doubled as support straps that kept the chair from over extending while in use.

Unfortunately for Hardy, this chair arrived a tad too late in the war to prove lucrative. Armies in the north and south were too busy to stop and rethink their personal comforts. For the few officers that did end up acquiring one, they quickly discovered that the upholstery, applied with brass tacks, was not easily replaced when it became damaged. More than that, though, portable campaign chairs were nothing new, especially within military encampments. Julius Caesar, for example, had at least one, as did George Washington, Charles Cornwallis, and Napoleon Bonaparte.

Acquired by Historic Charleston Foundation in 1996, this campaign chair’s provenance is fleeting. Nevertheless, the time period of its manufacture reflects an awkward phase in the Aiken household. William Aiken, Jr., though a financial supporter of the Confederacy, was outwardly opposed to disunion among the states. Even so, in 1862 his only daughter, Henrietta, married Andrew Burnett Rhett, a highly decorated Major in the Confederate Army.

One response to “From the Collection: Campaign Chair”