The White Swan Laundry stood at 723 King Street. It opened for business in April 1913 and remained in business for many decades. In Hurricane Hugo, the building suffered some damage, but was still clearly salvageable. But, the owner had other ideas and announced his plans to tear it down. In March 1995, the City investigated whether the building was more than 75 years old. Despite the owner’s claim that the building was not that old, the BAR determined that the building was indeed old enough to be protected and it denied demolition of the remaining façade on April 12, 1995. Historic Charleston Foundation and other preservationists agreed. The next month, the owner claimed that an after-hours emergency had caused the building to be unstable and a contractor demolished the structure without notifying any city officials first. There were no witnesses to this emergency even by the time a demolition contractor had been hired to finish the job. It was demolished without approval. The City’s only response was a very small fine on the contractor who demolished the building, but after letters to the editor pointed out the severity of the loss, the City filed charges against the contractor, for demolishing the building without permission. (Research notes by Kevin Eberle, 2016.)  Click here to see a photograph of the White Swan Laundry after Hurricane Hugo, and here to see additional views of the building before it was demolished. 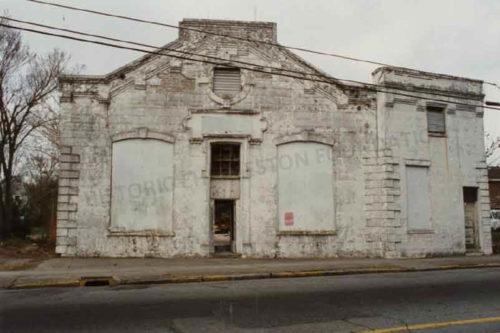