The “lost” building featured below is 20 George Street. The first mention of this property and the house was in 1834 when it was purchased by Samuel Paynter Ripley of Vermont. The dwelling was constructed between 1834 and 1851, for he sold it in that latter year, and it was advertised in the newspaper as one of the finest “mansions” in the city. The bricks used for the house were bright red and were commonly known as Baltimore pressed brick. According to family tradition, Mr. Ripley sat on the dock and watched each one of the paper-wrapped bricks be unloaded from the ship from Baltimore. The house was built in the side-hall double parlor plan. The house was demolished in February 1962, along with its neighbor at 292 Meeting. (Source: HCF Archives property file.) Click here to see other views of 20 George Street and click here to see photos of its neighbor, 292 Meeting Street, also demolished. 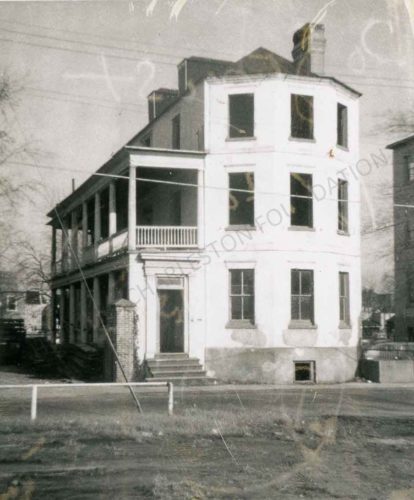