The building was the First National Bank Building (139 East Bay Street), constructed ca. 1815 and used by the Planters & Mechanics Bank, that organization having acquired the site between 1811 and 1813. First National Bank bought the building in 1872. In 1926 it became the Peoples First National Bank until 1932. In 1936 the building and lot were purchased by Mrs. Henry Deas. At that time it was occupied by Frederick Richards Ship’s Brokerage and subsequently sublet by the S.C. Employment Commission. The building, with its columned portico with intricately designed woodworking and considered one of the finest examples of classical architecture in the city, was demolished ca. 1957. (Source: HCF Archives Property File.) 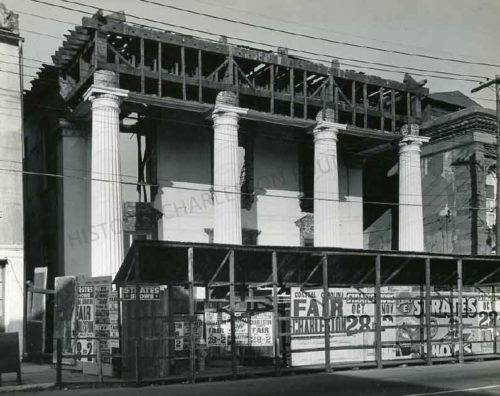