Stanyarne Hall (also known as Brick House), was a 2½ story stuccoed brick residence situated near the north bank of the Abbapoola Creek. There’s no record of the date of construction but members of the Stanyarne family owned Johns Island lands as far back as 1696, and it is from these Stanyarnes that the estate took its name. Over the years it was in the hands of Stanyarnes, their relatives, and connections by marriage, including the Stevens, Bryan, and Roper families. Dr. William Roper, a cotton planter, struggled financially after the Civil War and the plantation was sold after mortgages were foreclosed in the 1870s. The property was then rented, followed by years of vacancy. The house was demolished in the 1950s. (The Story of Sea Island Cotton, Richard Porcher, Wyrick & Co., 1995; “John’s Island House…,” News & Courier, 7/18/1938.) 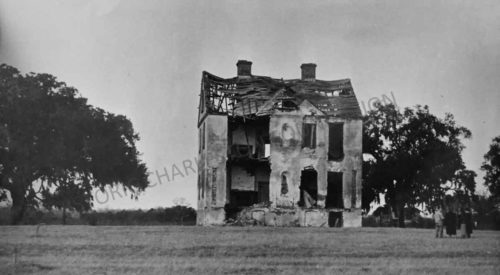