The Lost Architecture: May 2019 Edition

The addresses for these houses are based on a “best guess” since there’s no history on these houses in HCF’s Archives. The evidence for the identification is found in Sanborn Maps and newspaper articles. The 1902 Sanborn Map shows three neighboring houses at 150, 154, and 156 Ashley Avenue. (152 Ashley appears to be a narrow lot between 150 and 154.) The houses at 154 and 156 Ashley are gone by the 1944 Sanborn Maps is published so they were razed sometime after 1902 and before 1944 by St. Francis Xavier Infirmary, leaving the lone 150 Ashley Avenue on the property (148 Ashley had been razed earlier). St. Francis had purchased the property to enlarge the site on which a new nurse’s home would be erected. Soon the News & Courier reported that 150 Ashley would be razed, and then advertisements for salvage materials on the site began to appear. Construction on the new six-story building began in early 1949 and was completed by the time 1951 Sanborn Map was published which shows St. Francis Xavier’s School and Home for Nurses on the site. (News & Courier and Evening Post articles accessed via the database “America’s News—Historical and Current”–Charleston County Public Library website; Sanborn Maps accessed via the database “Fire Insurance Maps Online”—Charleston County Public Library website.) 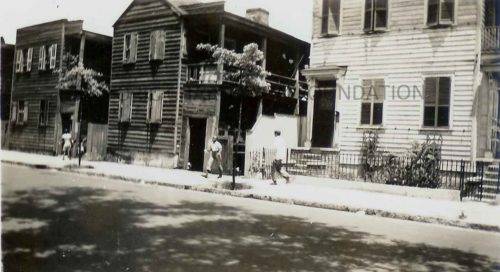