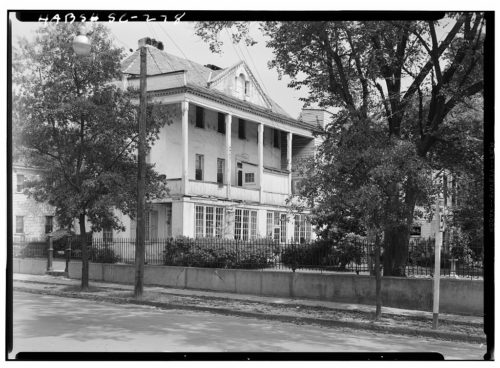 The answer is 135 Cannon Street. There is no history on this building in HCF’s Archives. What is known is that more than half a century was the hospital and training school for African American nurses. Founded by Dr. Alonzo C. McClennan in 1896, the idea grew out of his frustrated attempts to secure practical training for black nurses at other schools in the area. Anna DeCosta Banks was named the hospital’s first head nurse when it opened its doors. She later became superintendent of nurses and served the hospital for 32 years. The hospital stayed open for 62 years, finally closing its doors in 1959 when the McClennon Banks Hospital opened in its place on Courtenay Drive. The brick building with its interesting half-octagon turreted facade received a historical marker in 1991 to commemorate its training of black nurses and service to the black community.” (The Old Codgers’ Charleston Address Book, Vol. 2.) The 1958 photograph by Louis Schwartz is from the Library of Congress Prints & Photographs Online Catalog. An engraving of the building can be seen on HCF’s Online Catalog.