Last month’s NTB received another large response! Congratulations to Suzie Callaway, whose name was selected at random.The answer is The Marcus Building at 2 Broad Street. The building that had been at the northwest corner of Broad and East Bay streets dates back as far as 1778 and had a long and useful career. In 1960, the buildings at 2, 4, 6, and 8 Broad Street and 123 and 125 East Bay streets were combined to form one building. Occupants included the headquarters for horse-drawn cars, a book store, a liquor store, an early local newspaper plant, and in the 20th century, the J.S. Pinkussohn Cigar Store, Demos Brothers Restaurant, and the Marcus Rexall Drug Store. The drug store burned down in 1963. In the 1990s, South Carolina National Bank gradually expanded its facilities to occupy the whole north side of the block of Broad Street from East Bay to State Streets. SCNB then merged with Wachovia Bank, which merged with Wells Fargo; Wells Fargo still occupies the building. (Source: Charleston Evening Post, 12/31/1963, The Old Codgers’ Address Book, 1900-1999.) The photograph of the Marcus Rexall Drug Store was taken by Historic Charleston Foundation in 1961.

Special recognition goes to Maxwell Mowry, who recounted a personal anecdote about the building. He recalls taking the People’s Building elevator up to an upper floor where he and several others observed the “spectacular fire” from the window. And he still has a “Bozo the Clown” medicine bottle from the Marcus Rexall Drug Store! 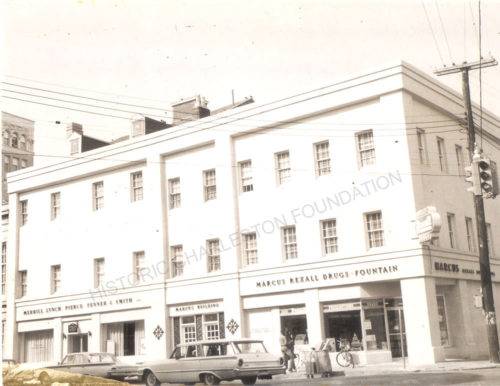