Today, Monday, April 20th, the Army Corps of Engineers released its initial plans for protecting the Charleston peninsula from rising seas. The plans are specifically designed to focus on storm surge protection for the Charleston peninsula to reduce health, safety and economic damage risks. The proposed plan is the result of a Congressionally approved and funded study, generally known as the “3 x 3” project as it will take three years to complete at a cost of $3 million.

The proposed protection system primarily consists of a perimeter wall surrounding 8 square miles of the Charleston Peninsula and a “wave attenuating structure” (essentially a riprap jetty) located 250 feet off the Battery Seawall in the harbor. The Army Corps also is assessing the use of non-structural measures (e.g. elevating buildings) and buyouts for areas outside of the proposed wall, as well as the installation of permanent and mobile pump stations.

It’s important to note that this “Tentatively Selected Plan” released today is, in fact, tentative. Details for the proposed wall—its exact location, height, design and appearance—are subject to extensive public review and input, and the Army Corps has expanded the typical public comment period from 30 to 60 days. Given the current social distancing measures, Historic Charleston Foundation (HCF) is advocating to extend the public comment period even further.

HCF is working diligently to analyze the specifics and provide constituents with an in-depth review and analysis of the proposal as soon as possible.  We encourage residents to review the draft plan on the Army Corps website here to learn as much as possible about the proposed Tentatively Selected Plan in order to provide informed comments.

HCF has engaged with the Corps in this study last year via the Dutch Dialogues Charleston (DDC) project, which was spearheaded by HCF. As part of its research, the Foundation helped organize  a trip to New Orleans with the Corps and city staff to study its approach to flood mitigation and, in particular, how its flood protection systems (walls and levees) interface with the city’s renowned historic districts. On that trip, we learned how critical community engagement is to the success of complex Army Corps projects such as this. Your questions, comments and feedback will be vital in developing the best possible plan for protecting Charleston from storm surge and sea level rise. A revised plan, incorporating public feedback and consultation with the City, will be sent to the Army Corps’ head office in DC this fall, where it will be subject to a 12-month feasibility analysis.

HCF is generally supportive of the concept of perimeter protection, if our concerns about the design, aesthetics and impacts to historic resources can be alleviated. The DDC final report addresses the 3 x 3 study and how a proposed system could be properly incorporated into the City’s cache of tools to combat flooding. We remain committed to the recommendations made in this report, which states:

Perimeter Protection Must Be Multifunctional-and Beautiful. The importance of the Perimeter Protection Study cannot be overstated, and any perimeter protection alignment must be logical, practical, and forward-looking. Special care is needed to ensure that perimeter protection intersects in a logical, sensitive way with the Historic District. Certain alignments will create important stormwater storage opportunities and help manage groundwater. All alignments should take a multiple benefit approach that contributes to Charleston’s character and exceptional quality of place.

In order for this project to provide effective protection, HCF believes that the City also must continue to improve stormwater management, so that water will effectively drain to the rivers, via pumps and collecting basins, pursuant to the DDC recommendations. Further, HCF feels strongly that any protection system should be assessed for their ability to double as active park space, providing an improved connection to the waterfront. Ultimately, it should not only protect our community, but also connect and enhance it.

While the 3 x 3 study project was fully funded by the federal government, construction of a perimeter system is not. IF Congress authorizes and appropriates the funds for this project, the federal government would pay for 65% of the total construction costs and the City of Charleston would have to cover the remaining 35%. Attaining that level of funding both federally and locally will be a challenging and lengthy process. However, having a fully vetted, shovel-ready project ready for execution will be helpful in securing funding. It is our plan to work collaboratively with the Corps and the City on a viable plan to obtain this significant capital outlay from Congress. We will be competing with other coastal communities, such as Miami and Norfolk, that are undergoing the same process.

It may seem radical to return to Charleston’s roots as a fortified city; however, we believe as an organization charged with protecting Charleston’s historic resources that it is crucial to explore all options for a comprehensive, long-term strategy to combat the threats of flooding as the ocean continues to rise. HCF has been named a Consulting Party as the Corps fulfills its legal obligations under Section 106 of the National Historic Preservation Act to assess all potential impacts to cultural resources. We look forward to working with the community, the Corps, the City of Charleston and other parties to ensure that the final plan adheres to the recommendations of the Dutch Dialogues Charleston report, contributes to Charleston’s quality of place, and is sensitive to the historic and cultural integrity of our neighborhoods. 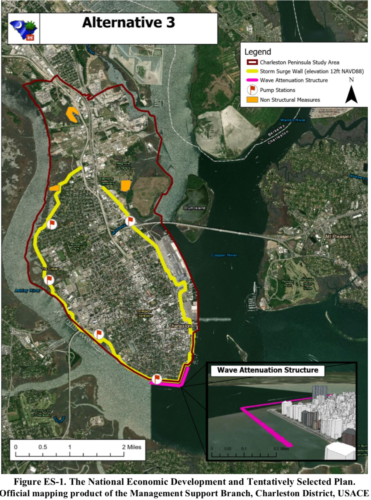