Uncover History Through Artifacts Left Behind

Pictured above: This site on King Street was once the North city gate where Charles Town surrendered to the British in 1780. Before construction began, an enormous hole was dug to make way for the hotel’s subterranean parking garage.

There are no local protections in place for archaeological sites in Charleston, South Carolina. Wait. Did you read that correctly? No regulations protecting the archaeology in this incredibly historic city? That’s right – even though this city boasts the remains of the only English walled city built in North America, has sites that speak to its wealth and prominence in the colonial and antebellum periods, a staggering number of archaeological sites that can illustrate the realities of slavery and much more…none of it is protected.

It’s a fact that’s hard to believe, especially since Charleston broke new ground (no pun intended) in historic preservation in 1931 by enacting the first zoning ordinance in America specifically designed to protect its (above-ground) historic resources. Other historic communities such as St. Augustine, FL and Alexabdrai, VA have archaeological ordinances.In St. Augustine alone, approximately 800 archaeological projects have been completed through its ordinance, resulting in the documentation of 10,000 years of human history.

We know we can create an ordinance that is responsive to these concerns. To reduce bureaucracy, it will be tied it into existing city frameworks through the permitting and design review process. The overarching goal of the ordinance would then be to prevent valuable cultural resources from being destroyed by large-scale development while placing as little burden as possible on the average homeowner. This can be done by establishing zones of significance and setting trigger points for large-scale development such as hotels and office buildings where large swaths of the city are impacted. We want to make sure we do as much good work as possible while striking a balance between preservation and business development by setting timetables and fees in advance to take the uncertainty out of the process.

But time is short and as the city grows at an ever increasing rate, more and more sites are destroyed and the archaeological evidence they contained is gone forever. Every day citizens and tourists alike walk over hundreds of years of Charleston’s historical record, and without a municipal ordinance in place to protect archaeological artifacts from future destruction, that record is in danger of being lost forever. 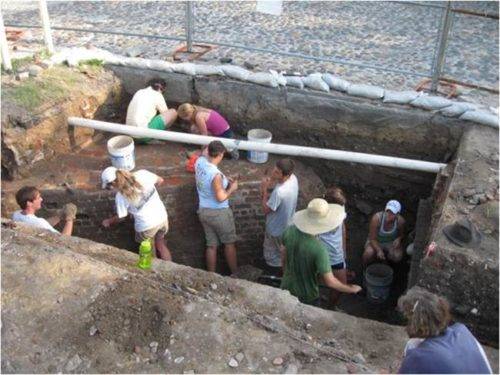 CofC students worked with the Mayor’s Walled City Task Force in 2009 to investigate the redan at South Adger’s Wharf, part of the early colonial fortifications of Charles Town (c.1690s)