One of America’s Most Important Neoclassical Homes 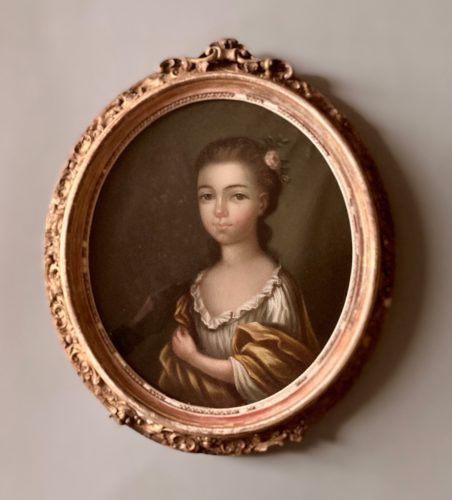 Christina Broughton, wife of Rev. Mr. Daniel Dwight and daughter of Thomas Broughton, the first owner of Mulberry Castle, appears here as a blissful young woman with a look of youthful exuberance and anticipation for the privileged life ahead of her. If only the same could be said for her painter.

It’s seriously doubtful that Henrietta De Beaulieu Dering Johnston set out to become a professional portraitist. Believed to have been born in France to Huguenot parents, she traveled to London in the late 1680s and then to Ireland, this time with her husband and two young daughters. It is generally believed that she began drawing and painting during this period, though any evidence of formal training has yet to be discovered.

Widowed circa 1702, Henrietta continued to produce portraits of relatives as a means of income until 1704, when she remarried to Vicar Gideon Johnston, the newly appointed bishop’s commissary to South Carolina and rector of St. Philip’s Church in Charleston.

After her husband’s untimely death in 1716, Henrietta began selling her paintings to provide for her family. She is now recognized as America’s first professional female artist and the first pastel artist to work in South Carolina. Approximately forty of her portraits pertained to Charleston citizens. Most were members from local Huguenot families, though others, like Christina Broughton, were from her late husband’s congregation.

This portrait descended to Charlotte Palmer Ellison (Mrs. Ellison Capers) whose name is penciled on the reverse of the frame. Mrs. Capers was descended from the Broughton family on her maternal side. It was recently donated to HCF by the owners of Mulberry Plantation and can be seen hanging in the Nathaniel Russel House’s decorative arts gallery.