Join us for the South Battery Street House and Garden Tour, one of the most photographed and historic streets in Charleston, within walking distance of White Point Gardens. Construction of the postbellum era includes early 20th-century waterfront mansions, some of which overlook White Point Garden and Charleston Harbor, along South Battery and Murray Blvd. Browse from one location to another on your self-guided tour. House and Garden locations will be listed in the Festival Program, available with each purchased ticket. T 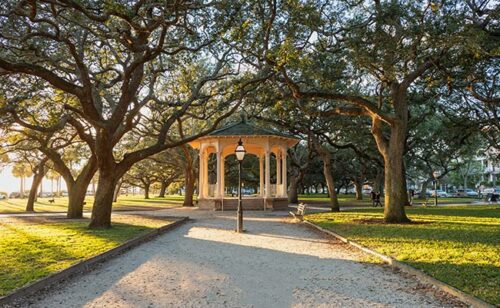 Located in the heart of Charleston’s historic district, this prominent landmark provides a spectacular view of Fort Sumter and Charleston Harbor, where the Ashley and Cooper rivers empty into the Atlantic Ocean. It was first used as a public garden in 1837. With the outbreak of the Civil War, it became a fortification for the city. Visitors today also find an impressive display of historic mortars and cannons from the Civil War used to shell as well as defend the city. At the corner of Murray and East Bay there is a Confederate monument. In the early 1720s, the infamous “gentleman” pirate Stede Bonnet was hanged here with about 50 others like him. Townspeople filled the gallows area and jeered as the outlaw was brought to his rightful end. Bonnet was buried in the nearby marsh. His epitaph has been memorialized and stands today in the park. Courtesy of DiscoverSouthCarolina.com