Join us for the East Bay Street House and Garden Tour, one of the most photographed and historic streets in Charleston. Browse from one location to another at your leisure and enjoy the walk along the way. House and Garden locations will be listed in the Festival Program, available with each purchased ticket. Additional East Bay Street Tour Date: March 19, 2 – 5 pm.

Colorful 18th century dwellings which once housed shops on the entry level intermingle with grand antebellum mansions. Panoramic views of Charleston Harbor further enhance the allure of this area. 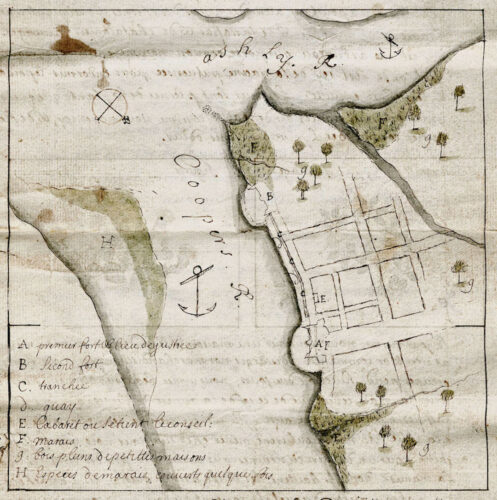 It may surprise some to learn that Charleston’s historic East Bay Street wasn’t originally a street. Rather, it began as a public wharf or quay adjacent to the tidal mudflats of the Cooper River. Its physical characteristics were not especially conducive to maritime activity, however, and the natural riverbank was susceptible to erosion. To facilitate the improvement of maritime logistics and to protect the town’s quayside buildings, the Lords Proprietors of Carolina initiated a long-term partnership of public and private interests that set in motion the construction of the broad waterfront landscape we see today.

East Bay Street is one of Charleston’s most scenic and popular thoroughfares, home to numerous shops, restaurants, and historic buildings that contribute greatly to the city’s charm. Running parallel to the Cooper River waterfront, East Bay Street was for three centuries the main artery for the traffic of goods and people moving between the town and the commercial wharves that once projected into the river. Most of that maritime infrastructure is now gone, however, and a swath of firm real estate averaging one-eighth of a mile wide separates the historic street from the water’s edge. This volume of accumulated earth and human construction obscures the street’s distant past, but physical evidence of its humble origins survive just beneath the surface.

The historic core of East Bay Street, spanning from Market Street southward to the northern end of the High Battery, was created nearly 350 years ago in the early days of the Carolina colony. Long before long wooden wharves projected far into the Cooper River to receive cargo from incoming ships, East Bay street was simply an exposed riverbank just above the line of high water marked by the daily fluctuation of the tides. To visualize its original appearance and to better understand its transformation into the landscape we see today, we need to point our imaginations back in time to the earliest days of the Palmetto City.