As we enter the time when hurricane season really starts to pick up, the time is right to highlight this collection!  The Hurricane Hugo Damage Assessment Survey shows one facet of how preservationists responded in the aftermath of the terrible storm. Hurricane Hugo made landfall as a Category 4 storm just north of Charleston on September 22, 1989, producing tremendous wind and storm surge damage along the coast. At the time, it was the strongest storm to strike the United States in 20 years. Most buildings in downtown Charleston sustained significant damage. As the storm approached, cultural institutions took basic protective measures to prepare for the arrival of the storm but few were prepared for the magnitude of the outcome of Hurricane Hugo. 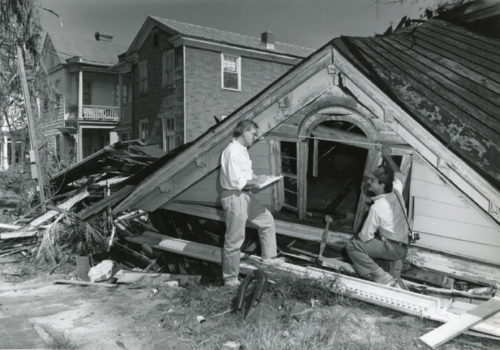 Immediately after the storm, Historic Charleston Foundation and other preservationists sprang into action, organizing an emergency stabilization task force at the request of the City of Charleston. With a phone bank (set up at the Frances R. Edmunds Preservation Center at 108 Meeting Street) and a battery of both expert and amateur volunteers, a multilevel effort commenced to record the damage, salvage architectural elements and building components, disseminate technical information, and fundraise for disaster relief. Historic Charleston Foundation played a major role in these efforts. Under the Foundation’s direction, preservation students in South Carolina and along the East Coast undertook a survey to assess and photograph buildings and the storm damage. On page 1 of the survey, a basic architectural description was recorded. The damage to the building indicating no, minor, or major damage was recorded on page 2. Survey areas included not only the Charleston historic district and East Side but also Adam’s Run, Ashley River Road, Edisto Island, James Island, Johns Island, Kiawah Island, McClellanville, Rockville, Mount Pleasant, and Sullivans Island. 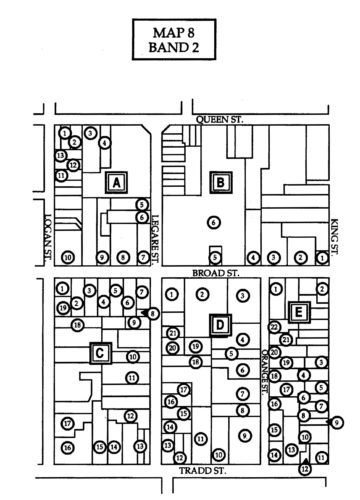